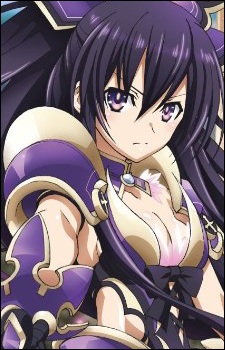 
Age: 16 Three sizes: 84-58-83 Height: 155 cm Codename: Princess Spirit number: 10 Rank: AAA-Class Spirit Affiliations: Ratatoskr, Raizen High School Hobbies: Eating, dating Shidou Angel: Sandalphon; Nehemah Weapon: Throne type Astral dress: Adonai Melek Sephira: Malkuth Risk factors: AAA Spacequake: B Strength: 230; 240 (volume 7) Consistency: 202; 178 (volume 7) Spiritual power: 125; 201 (volume 7) Agility: 142; 150 (volume 7) Intelligence: 32; 33 (volume 7) Favourite quote: "You were there for me, you saved me, much like what today, you asked me out on a date and showed me how nice this world is." Tooka Yatogami is one of the main female characters of the Date A Live series. She is the first Spirit saved by Shidou and transfers into his class at the end of the first volume. Shidou named her for the date of their first meeting, the 10th. Reine later added the Yatogami surname for her. She is ignorant of the ways of the world, but nevertheless has a normal sense of embarrassment. She seems to have strong feelings for Shidou, which she is shown to be unable to understand when she gets jealous after seeing Shidou accidentally kiss Yoshino. When Tooka first appeared on Earth, unsealed, she was very wary of everyone before Shido finally got the chance to talk to her, because she was constantly being attacked by the AST. However after she was sealed by Shido, she could finally develop, express, and experience life on Earth. Due to the fact that Tooka is new to everything including her emotions, she has a very child-like personality that can make her seem naïve, emotional, energetic, and sometimes gullible due to the fact that she has not been on Earth that long to interact with other people. However, when learning that Yoshino is a Spirit like herself she decides to support Shidou in his cause to save the other Spirits such as Kurumi, even actively participating in battles at times. Due to being a Spirit, she is always being targeted by the AST and is aiming for the kill, because of that she hated humans for always shunning her and thinking that she wasn't allowed to live in this world, but her whole life changed when she met Shidou. She was overjoyed that she could live with Shidou now but knowing that Origami was there too she was somehow agitated and is always having a minor quarrel with Origami (mostly because of Shidou and their feelings). Even with that high and cool presence, Tooka lacks some common sense and loves food very much. Despite her lack of knowledge or experience, Tooka does have a normal sense of embarrassment, as shown by her overreacting when seen naked, or caught in otherwise embarrassing situations. At times, Tooka can be surprisingly insightful, as well as perceptive and understanding in regards to other people's feelings, especially when it concerns Shido and her fellow Spirits. She gets also along very well with Kaguya and Yuzuru, especially Kaguya because of their similar energetic personalities. However, Tooka sometimes has problems understanding the two of them, because of the weird way each of them talks. Tooka is a highly offensive combatant who uses a sword as her primary weapon. Aside from this, Tooka also has a lot of "mana" within her spirit body which increases both her offensive and defensive abilities. Her primary armament is Sandalphon, which takes on the appearance of a gilded throne which doubles as the scabbard of her broadsword. Her fighting style mostly consists of either physical attacks with "mana" encasement on her sword and body, or a high energy attack (like a laser beam) combined with her sword. The throne itself seems to be a sort of support machine, based on how she uses it. It can be changed into a transport vessel by laying it horizontally, or to unlock the final form of her weapon, Halvanhelev, by cutting the throne into exact halves. Later in the series, after she got her power sealed by Shido, she can retrieve a bit of her original power if she focuses hard enough or if she becomes emotional.